Did they or didn’t they? Did USP take seriously input from APC (as well as that of APhA, NCPA, and numerous other pharmacy stakeholder groups) urging the USP Compounding Expert Committee to avoid arbitrary limits on beyond-use dates and batch sizes in its new Chapters <795> and <797>? We’re soon to find out.

Earlier this week, in its Healthcare Quality & Safety e-newsletter, USP announced that it will release the revised chapters on November 1. The new chapters are set to become effective six months after release. Your APC team will be reviewing the new chapters carefully, and we’ll have a fuller report following their release. 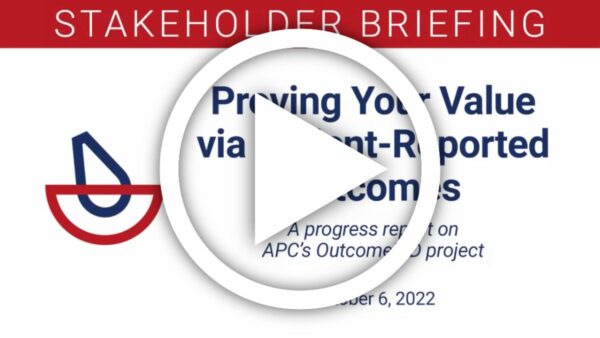 When APC member Jack Korbutov heard about the OutcomeMD platform at APC’s Owner Summit back in March, he knew he wanted in. Now, six months later, he’s implemented the patient reported outcome system in his pharmacy in Philly, and he says it’s already paying dividends.

Korbutov shared his experience in an APC patient reported outcomes briefing last week. Here, we’ve captured his eight-minute presentation on video just for you. Watch it, and learn how your pharmacy can leverage OutcomeMD to demonstrate that the compounds you prepare do for patients what they’re supposed to do. Then contact lkaiser@outcomemd.com to sign up!

The Outsourcing Facilities Association announced this week that it reached a settlement agreement with the FDA that will spur the agency to promptly review long-pending nominations for active pharmaceutical ingredients for use by FDA-registered 503B outsourcing facilities to compound drugs needed by patients.

OFA says the settlement of an OFA-supported lawsuit will allow 503B facilities to improve health care provider and patient access to certain medications and to ease drug shortages in a timely manner.

Congressmembers to FDA: On cBHT, remember the patient

The letter asserts that the recommendations of the flawed NASEM report on compounded hormones “would interfere with the practice of medicine and prevent practitioners from treating their patients with therapies that they determine are best for their patients.”

Key points in the letter were that continued access to compounded hormones is key and that the personalized therapies that compounding provides are essential given the limited number of FDA-approved manufactured hormone products on the market.

Is your board of pharmacy aware of USP’s BUD proposals?

Last week APC sent a letter to every state board of pharmacy to urge them to pay attention to USP’s proposed beyond-use date changes in Chapter <795> and <797>. “Without your input,” we wrote, “It’s possible your state will find itself saddled with certain regulations that limit patient access to compounded preparations while creating considerable waste and cost containment issues for the pharmacies that compound those preparations.” You can help by mentioning the letter to your pharmacy board members and executive director and offering to serve as a resource to the board in developing their comments to USP.

Funded by the Pharmacy Compounding Foundation, placement of ‘advertorial’ content on Everyday Health — a three-part series about compounded hormone therapy — debuted last week. Read it here, and share with your patients and providers you work with.

The news reports in the wake of the devastating tornado event in Kentucky have been heart-breaking. As relief efforts continue, you may be interested in helping from afar. Tragedy can bring people together in moments of crisis to provide assistance where it’s needed. The Kentucky Society of Association Executives has directed those who want to help to this list of local charity organizations. Do what you can, if you can, where you can.

How do you think currently proposed revisions to USP Chapters 795 and 797 will affect your patients and pharmacy practice? We need to hear from you, and soon!

While the science underlying the USP Compounding Expert Committee recommendations for using stability studies to establish extended BUDs may be sound, and the documentation provided by the Compounding Expert Committee supporting the processes involved in these studies may be valid, the imposition of arbitrary limits to BUDs (despite these studies, along with other arbitrary changes to batch sizes, microbial risk levels, etc.) only serves to generate noise. What is missing is any evidence to show that USP’s proposed changes represent any improvement in compounding quality and public safety over the chapters that have been in place for the past ten years.

PLEASE share with us your input, evidence, and real-world examples of the effect of the proposed changes by December 31. Send them to info@a4pc.org.

To help you in determining your feedback, here is a summary of the proposed <795> and <797> changes by APhA’s Seth DePasquale that you may find helpful.

Here’s a small thing you can do to help promote APC’s campaign to save compounded hormones: Simply paste the sentence below into your email signature – so that whoever you’re communicating with can be directed to compounding.com to learn more. It’s the little things, right?

A 90-day cBHT fundraising campaign by our friends at Letco has resulted in 350 pharmacies donating to APC’s effort to save compounded hormones, many of those for the first time. On Letco’s website and via its sales team, customers we asked if they’d add and additional amount to their orders to support the cBHT campaign.

“It was a creative way to put the threat to compounded hormones on compounders’ radar and to raise money for our campaign,” said APC CEO Scott Brunner. “We appreciate Letco’s leadership in embracing the effort – especially their sales team members, who were wonderful ambassadors for the campaign.”

The effort generated $4,145 in new money for APC’s campaign. All contributor names have been added to the cBHT Honor Roll page on APC’s website.

One more thing: This week Letco included APC’s cBHT campaign as an option in its annual holiday charity drive. Check it out – and VOTE for us!