IMPORTANT: The FDA announced today that, effective December 31, 2021, it was withdrawing the March 2020 temporary guidance that, among other things,  allowed “manufacturers that were not drug manufacturers” to produce alcohol-based hand sanitizer.

Effective Dec. 31, 2021, companies manufacturing alcohol-based hand sanitizers under the temporary policies must cease production of these products. After that date, manufacturers wishing to continue producing hand sanitizer can do so provided they comply with the tentative final monograph for over-the-counter topical antiseptics and other applicable requirements, including the FDA’s Current Good Manufacturing Practice requirements.

Got questions? You’re not alone. The FDA has some answers posted already, and it’s holding a listen-only Zoom call on Thursday October 14, 2021, at 11:00 AM EDT:

APC President Michael Blaire and his wife Dorothy got the opportunity to talk compounding over dinner this past weekend with Florida Senator Marco Rubio. In particular, Mike discussed with the senator how APC’s urgent-use legislation can help remedy some drug supply chain challenges revealed by the pandemic.

It’s been a week of mixed messages from FDA regarding pharmacy compounding.

On Monday, HHS and FDA delivered technical assistance comments to the House Energy & Commerce Committee about HR 3662, the Patient Access to Urgent-Use Pharmacy Compounding Act of 2021, supported by APC.

Despite the fact that much in the legislation mirrors FDA’s own pandemic-timed temporary guidance, they don’t much like the bill: “FDA would have significant concerns if section 503A of the Federal Food, Drug, and Cosmetic Act were amended to allow for compounding, distribution, or dispensing of drug products before the receipt of a valid prescription order or notation for an identified individual patient under the conditions described in the proposed Act.”

Okay, now hold that thought for a sec.

On Wednesday, FDA released revised draft guidance for health systems that describes “certain circumstances under which FDA generally would not intend to take action if a hospital or health system pharmacy distributed compounded drug products without first receiving a patient-specific prescription or order.” The revision removes the one-mile radius provision contained in an earlier draft guidance, which would have allowed a hospital compounding facility to distribute a compounded drug to a hospital-affiliated facility withing a one-mile radius.

“There is baffling inconsistency between these two FDA stances,” said APC CEO Scott Brunner, CAE. “And it’s multi-layered inconsistency. First, FDA is telling Congress it opposes something the agency is presently allowing: The ability of 503A compounding pharmacies to prepare shortage drugs for hospitals when the drugs cannot be sourced from manufacturers of 503B facilities. Second, FDA bases its opposition largely on concerns about such distributions without prior receipt of a valid prescription — something not required under its current temporary guidance. And then it proposes revised guidance for health systems that actually removes altogether any requirement for hospital compounders to have a patient-specific prescription under certain circumstances — and those circumstances are fairly broad. This looks an awful lot like a double standard.”

In addition to the concerns Brunner enunciates, the hospital guidance creates a big loophole to get around commercially available/essentially a copy requirements. “FDA’s guidance is far more permissive than what HR 3662 would accomplish, and doesn’t have the same safety guardrails APC made sure are built built into HR 3662,” added Brunner.

HR 3662 would allow 503As to source shortage drugs to hospitals only when those drugs are on the shortage list and unavailable from manufacturers or 503Bs. The legislation would require a patient-specific prescription after the fact. It also would require adverse event reporting. None of those are required in FDA’s draft guidance for health systems.

Notable in FDA’s objections to HR 3662 are the agency’s assertions that 503Bs can fill the gap when manufactured drugs are in shortage. “If that’s the case,” said Brunner, “Why haven’t they been able to fill that gap during the pandemic? Why did FDA need to issue temporary guidance allowing 503As to source Covid drugs under tight guardrails? There is indeed a place and great need for 503Bs, but their number and nimbleness are not at all as FDA describes to Congress in its comments on HR 3662. It’s a mirage.”

APC will submit comments to FDA on the draft hospital guidance and will be working with members of Congress to assure that their understanding of HR 3662 is accurate.

Last stop on Scott’s Mississippi compounding pharmacy tour: Larry Krohn’s Beach Pharmacy in Gulfport. A beautiful pharmacy, it relocated after the original was destroyed by Hurricane Katrina in 2005. 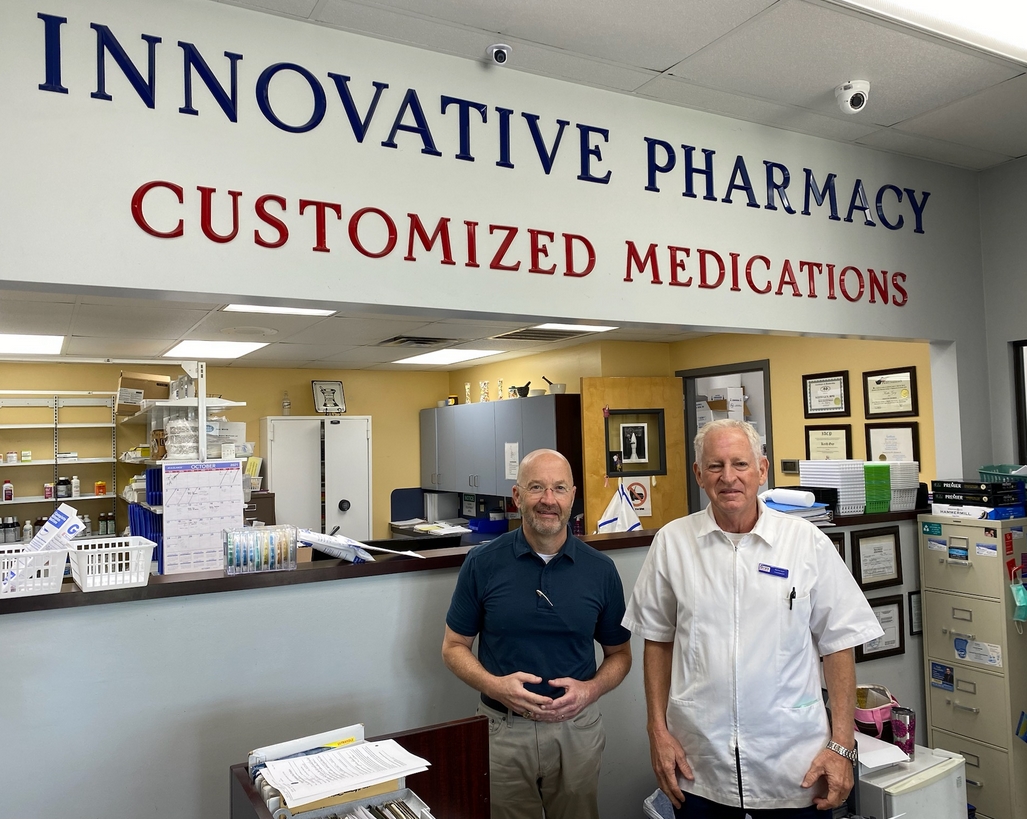 Scott had a great visit this afternoon with the folks at Vital Care Compounder in Hattisburg, Mississippi. About 70% of their business is compounded hormones, and they only ship in state. As you can see from the signage, they’re doing a great job urging their patients to tell their cbhtstory@compounding.com!

Scott had a great visit yesterday afternoon with APC member, Mississippi pharmacy board member, and owner (he wears a lot of hats) Ronnie Bagwell at Marty’s Pharmacy in Jackson. Always nice when an owner asks “How can I be helpful to APC?”

DEA is upping enforcement — are you ready?

Do you work with controls? If so, you NEED to be at next week’s important CE webinar: “Controlled Substances and the Corresponding Responsibility of the Pharmacist,” with Erika Fallon, RPh.

Compounding with controlled substances means you need to be more than smart and ethical — you must be 100% compliant. Because when it comes to compounding, the DEA doesn’t pull punches. 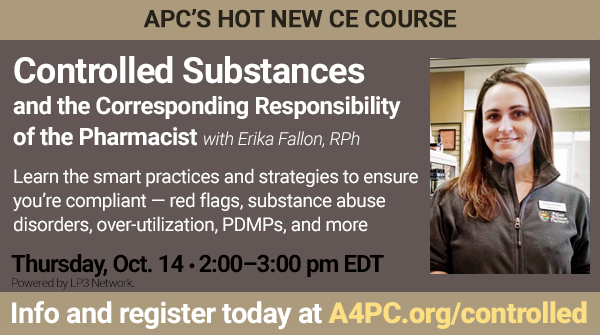 In this video, APC’s Scott Brunner joins our friends from Medisca for a conversation about the recent Federal District Court ruling against FDA on the MOU … and what happens next. If you ship interstate, it’s worth your time!