APC and NCPA hosted a briefing Thursday to explain USP’s proposal to restrict beyond-use dates in Chapters <795> and <797> — and the ramifications for patients. Nearly 800 registered for the briefing. The aim is that, seeing the risk to those patients, providers will join with pharmacy compounders to comment on the proposals — and to ask in particular that the proposed restrictions on BUDs for sterile compounds be reconsidered.

In the briefing, presenters Tenille Davis of Civic Center Pharmacy in Scottsdale, Ariz., and Anthony Grzib of Wedgewood Pharmacy in Swedesboro, N.J., asserted that USP has provided insufficient rationale or scientific evidence for how these proposed changes will benefit patients.

USP’s proposed changes to sterile compounding under Chapter <797>would require significant, expensive, and time-consuming testing be done on many compounded medications in order to extend BUDs. And add “likely cost-prohibitive” to that list: Stability studies have a price tag of around $30,000, Davis said.

The proposals would also limit batch sizes across the board to 250 units – a change that Grzib asserted will actually increase the potential for microbial contamination and errors, since on a need for 1,000 units, say, the compounder will have to enter the clean room not once but four different times.

“At the end of the day, these proposals won’t do anything for patients except require them to refill more frequently and increase the costs of those refills,” said Grzib.

For more detail, on the USP proposals, you can read the slides presented at the town hall here (PDF) or watch (and share it with your prescribers!) this video of the briefing: 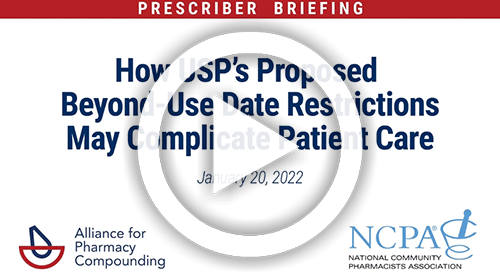 At the request of APC, APhA, and NCPA, USP has extended the deadline for comments on its proposals to March 17. We urge you to submit comments:

When you submit a comment, please include concrete patient-access examples — how overly short BUDs will unnecessarily complicate care for specific patients on specific therapies.

And more importantly, get the word out to more prescribers. Share those slides and the video, and explain how it’s critical they take a few minutes to understand the issue and submit a comment to USP.